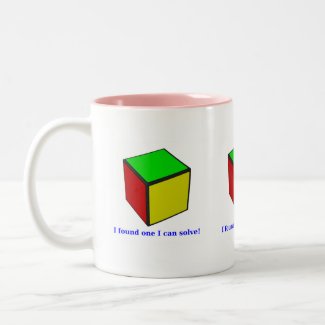 Little Miss Muffet
Sat on her tuffet,
Solving her Rubik’s Cube
Out came the pliers
And strong twisted wires
And soon it was good as new!

So, here are my recommendations for differently solving your cube.

When I was in school, my math teacher lent out his Rubik’s cube. Six months later, some of my classmates approached me, and said…

Can you give this back to the teacher? Don’t tell him who gave it to you.

Less than half the stickers remained. Most of the cube was a mess of sticky, gluey, black squares. When I returned it to the teacher, he held it as if it were a dead rat, and said

What happened to this??

I truthfully told him I didn’t know, some classmates had asked me to pass it back to him.

So I don’t recommend you peel off the stickers. They’ll lose their stickiness, and fall off again, and you’ll eventually be left with something that makes dead rats look good.

Instead, for those who would like your rubik’s cube to be differently solved,

Finally, I provide the following instructional video for those of you who want a faster way to cheat at their rubik’s cube. Enjoy!

One thought on “Rubik’s Cube Cheats”